A few days ago, my son asked me if we could go out to breakfast (on a Wednesday?) because we had no food in the house.

“Can I have leftover lasagna?”

“Yes, you can have for breakfast anything we had for dinner.”

*Okay, when it was a 1000 degrees here I allowed him to have pie a la mode for dinner--you want consistency read someone else’s blog, ‘cause you’re not gettin’ it here.
Posted by gossamer at 8:28 AM No comments:

Yesterday while I was prepping for class and my son was doing his homework, my son said to me, “Mom, I don’t understand religion.”

I put down my copy of The World’s Religions by Huston Smith and waited for him to continue.

He said, “In Christianity, I don’t understand if Jesus is God.”

I said, “Babe, you have no idea how many people have died over that very question.”

This was not the answer he was hoping for.
Posted by gossamer at 6:48 AM 3 comments:

So far this summer we have avoided the plagues that usually descend: tornados (okay not here), hurricanes (okay, not here either), Bubonic (ditto), and the most dreaded plague of all: ants. Sure, there’d been a few minor episodes, but nothing threatening. That is until last night.

Now last night’s plague was not of Biblical proportions, but it nonetheless cut to the quick. They went after the chocolate. Around here this is a serious offense. And it wasn’t just any chocolate, it was my husband’s treasured Summertimes from See’s Candies. These candies are rare and coveted because they are only available in the summer—hence the name. It is those, and not the garden-variety chocolate bars, that the little buggers went after.

I ran into the kitchen (he’d been eating them in bed!) with the box, dropped it on the counter and asked my husband what he wanted me to do with them. He just kept saying “save the chocolate” with a dazed expression on his face.

He used the vacuum cleaner to vacuum them off of the carpet and the bed with a vengeance seldom seen. He lovingly combed the surface of each candy for the dreaded interlopers.

Much ado about nothing you say, but at the end of the day, he did indeed save the chocolate.

We all need to have attainable goals.
Posted by gossamer at 7:06 AM 3 comments:

In the midst of all of the work to prepare for the new semester, I decided that my study needed rearranging. My brain was feeling stagnant, and I was getting burned out—so the obvious solution was to feng shui my study.

My poor husband had to move a very heavy 1940s desk, along with all of the scary electronic spaghetti behind it. Bookcases needed shifting, and all of the wall art and calendars are still in the wrong places. The hamster was traumatized when his cage got shuffled from one unfamiliar surface to another.

But to me, it’s been worth the trouble. The desk and computer (to which I have been chained) now faces the window, which looks out to trees, birds, and the birdbath. The cool breeze blows in, and it looks so peaceful in the morning. I do have my back to the door as I type this, but I’m willing to risk it. I have placed in the room a vintage modern chair that I am revamping, and am slowly working through the piles of detritus from last year’s activities.

My only feng shui question now is: I have a rug for the room and I can’t decide if it’s better feng shui to align the rug according to the furniture (Chinese design/feng shui is all about symmetry), or should I use it to cover up the worse of the ugly stains in the carpet?

Maybe a latte would help me decide.
Posted by gossamer at 7:38 AM No comments:

Remember Happy? His twin (yes there are two of him) bit someone.

The twin is named Easy.
Posted by gossamer at 7:12 AM No comments:

I have a love-hate relationship with coffee. I normally consider myself to be a tea drinker, but when I really must get a project done--I need the extra caffeine boost from drinking coffee (or Coca Cola, but that's another blog).

My students have made a special request that I NOT drink coffee before class. I can't imagine why.

I only have four days and two and a half hours to become a calm tea drinker.
Posted by gossamer at 1:57 PM No comments:

I went to chess camp with my son, and agreed to fold origami with the children as a free time activity. I got so much more. I did make a lot of new friends, and met many wonderful children, some of whom were great little folders, as well as great chess players. One child I met defies definition. I knew this child was trouble as soon as I laid eyes on him; he didn’t just have a twinkle in his eye, his whole body radiated mischief.

The child spent the day at my origami table. Every opportunity he got he was there with his rapidly folded models, shoving them in my face, demanding my evaluation and attention. I made him wait his turn before helping him realign his twisted little models.

One of the lovely surprises I received on arrival to chess camp, was that I was to be a camp counselor. I had been told I would room with three little girls; they gave me seven little boys.

And worse, they gave me the child.

He wouldn’t go to sleep; he had many suggestions to make regarding lights out: “Can’t we stay up later? Just ten minutes? Can we use flashlights? Can we play cards?" He ended up listening to his iPod (he is a ten year old) and using the backlight to disturb the other children. He also managed to get the other children to misbehave. All of them lost points in the camp’s reward system before finally giving up and going to sleep over an hour later.

Predictably, the next day the child turned up at my origami table. I looked up and said, “No, you cannot fold. I am tired of you. You wore me out last night. Go away.”

He begged to fold, so I gave him paper and sent him far away, across the room--for his own protection.

Half and hour later he returned, tail between his legs, and asked if he could come back. I said, “As long as you don’t irritate anyone, especially me.”

Oh, did I mention the child’s name? He is called Happy.
Posted by gossamer at 8:13 AM No comments:

After five days of chess camp--we're back. Well, it's only been two calendar days, but trust me, it was at least a week. We ran away as soon as we could. More details tomorrow, after I've slept.
Posted by gossamer at 8:23 PM No comments:

Today I'm going to the mountains for a week of chess camp with my son.

My anticipation knows no bounds.
Posted by gossamer at 7:30 AM No comments:

Labels: random musing
I have a friend who calls me a lateral thinker.

Is that a nice way of saying that I can’t think straight?
Posted by gossamer at 7:00 AM No comments:

Labels: what does that mean?

I just learned that scuba tanks have in them compressed air equivalent to the amount of air in a phone booth.

I have two problems with this: 1) I don’t believe in “compressed” air and 2) that is so not enough air for me.

I need a lot of air, and trust me, phone booths only have enough air for two, or maybe three minutes—tops.

I am not ever going scuba diving. Not that I was actually even considering it, but now it’s for certain.
Posted by gossamer at 7:42 PM No comments:

Yes, there are eleven on the list. I had to make myself stop there. Live with it.

There are many more I couldn’t think of that should be on the list; perhaps I will expand it later.

When discussing this list with a friend, who completely agreed with me about Blue Velvet by the way, we decided that we really need two bad movie lists: one for grotesque movies, and one for the merely banal.

I have seen a lot of bad movies.
Posted by gossamer at 7:49 AM 2 comments: 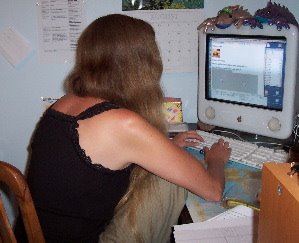 See how virtuous I am? I'm working on my on line class. It's going so well I'm posting pictures of myself on my blog working. What does this tell you?
Posted by gossamer at 12:58 PM 2 comments:

I am such a smart ass.

It’s really the only thing that I am both good at and enjoy. I wish there was a job that paid me for being a smart ass. Teaching is close, but not quite close enough.

If anyone knows of a job that will pay me to be a smart ass, please let me know. Everyone should have a job that they love, and for me, being a smart ass is a calling.
Posted by gossamer at 8:18 AM No comments:

To be fair, I should state right off that I don’t really like movies. I mean some are good, but overall sitting in a dark cinema watching a film is as good as a sleeping pill. I am in fact famous for sleeping through movies.


I have a child. One does things with and for children, that one would never ordinarily do. Going to see the sequel to Pirates of the Caribbean is one such thing. Keep in mind please that I didn’t really like the first movie, with the exception of the boat docking scene (where it sinks—“What boat?”), and the smithy scene (“Pirate.”). In my view, two clever scenes do not a movie make.

Well, if I thought the first movie was bad, nothing could have prepared me for the banality of the second. I had made it through almost two hours, when I finally went out into the lobby. Surely the film was almost over, right? I asked two gentlemen who worked at the movie theater what the run time of the movie was. They smiled, so helpful, and said, “Two hours and forty-five minutes.” I honestly thought they were teasing me, so I said, “You’re kidding?” They said, “No ma’am.”

Another hour? ANOTHER HOUR? I told my husband I was leaving and walked a mile and a half in ninety-degree temperatures to our friends’ house where we were having dinner.

What can I say? I snapped. But at least I escaped some terrifyingly dull pirates.

Oh, and now I have to update my Ten Worst Movies list.
Posted by gossamer at 7:08 AM No comments: