Today is my car's birthday. I almost didn't buy it in orange. I mean, maybe it was just a seasonal thing? Maybe a bright orange car isn't a good idea? I mean, I don't work for the secret service, but I can't EVER be sneaky.

And there's always this: "There IS a Great Pumpkin Charlie Brown." 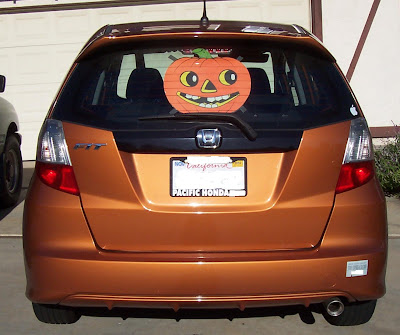 Comedy Central Rally to Restore Sanity and/or Fear Signs (some are better than others):

Who Brought the Fried Chicken Y'all (my son's fave)

Obama won't force Muslims to worship Jesus, so I'm voting Tea Party (my husband likes this one, presumably for its astonishing lack of tolerance and reason)

Moderate to the Extreme (another fave)

Here are the moderate Muslims (with a down arrow held by folks in Muslim garb with big smiles :))

Think Outside the Fox

Palin Would Have Quit

Why am I afraid?

Proud to be non-affiliated

I believe in a sanity clause

Unite for Sanity in America

I Have Bed Bugs

I'm Afraid of YOU

Congressional Smackdown: Is this what it's come to?

We shall require a substantially new manner of thinking if mankind is to survive. Albert Einstein

Are you sure you locked the front door?/Do you know where your wallet is?

Don't feed the bears (politicians' faces on the bears--Palin, and maybe Barbara Boxer?)

You can't fly with just a left wing

A rally beats housework any day

Another Crazy Utah Mom for Sanity

Keep Fear Alive and Restore Sanity (both on pumpkins)

Give Quiche a chance

United Against the Robots

Hitler is Hitler (with two photos of, well, Hitler)

Be sane, not inane

Wouldn't it be nice if we could restore sanity? It all depends on whether we still have enough sanity to restore. I'm a little worried that there isn't enough left to go around. I think we've squandered it over the last 10 years. When was Fox News founded? Or should we trace its loss all the way back to the Reagan administration?
Posted by gossamer at 11:24 AM 6 comments:

Starting Over, or Drinking Arsenic

Starting over in two respects I suppose. I'd like to start blogging again; I miss it terribly. I quit blogging because I started working so much on the computer that blogging was just that much more time on the computer, but I think, I hope, I have adjusted.

The other thing that I would like to start doing again is yoga; it was such a part of me for so long. I was a daily Ashtanga practitioner, but two years ago I suddenly had to quit. I started getting wicked headaches and neck aches. I'd stop yoga for a week, and they'd abate; I'd start the yoga again, but within a week or two the headaches would be back, and the cycle continued. Finally a year ago, I gave up the yoga altogether and went to the doctor. He diagnosed me with transformed migraines. We've been playing the hormones, inadequate sleep, overactive brain cells (like I needed him to tell me that), and stiff neck game ever since.

Well, I had the grandfather of all migraines two weeks ago. It lasted all week (yes, I went to school anyway and inflicted it upon my poor students), and my doc was unavailable, so I went to a substitute doctor. Sometimes new eyes see something, well new, and he sent me in for neck x-rays, and set me up for physical therapy.

I went to my first physical therapy appointment today, and wow, I had no idea that something that was supposed to be good for you could actually be bad for you. Turns out that I have degenerative disc disease. I asked Dave, my physical therapist (I'm telling you his name so I never have to type physical therapist again), told me it was probably YOGA. What? Apparently the very poses that saved my life when I had RA (rheumatoid arthritis--I am never typing that again) probably caused my migraine suffering. I was in shock. I feel like have been drinking arsenic. How could I have done this to myself?

I tearfully told my husband this, and it took him a while to understand why I was so upset. He laughed and said it was only my fault if I hit myself on the head with a hammer while doing yoga. He was also thrilled with the diagnosis. He said finally I have something (unlike RA, an autoimmune disease--all better now :)) structural--something Western medicine is actually good at! And it's true. We have a plan, with photocopied handouts, appointments, medicine, and a possible end to the pain. It also means that everything that I do, or have done, is totally wrong, from the yoga, to how I sit, how I work at the computer, how I drive, is wrong, wrong, wrong.

Dave said I could do yoga as long as I do no backward bends--so no Ashtanga, and modified everything else. Sniff. So, I bought two new yoga books today. One has a sexy skinny girl on the front filled with lots of fun energetic poses that I'd love to do, so since I'm a sexy skinny girl I bought that one. Duh. The other one has dumpy people doing sensible forward bends that Dave would approve of, so I bought it. Boring. I will take them to my appointment next week for his feedback.

I also retrieved a straight backed chair from the land of Black Widows (the garage) and brought it into the living room. I went out to the garage to get the lint/pet hair removal brush, but before I could use it, one of my lint depositors had already found the chair. 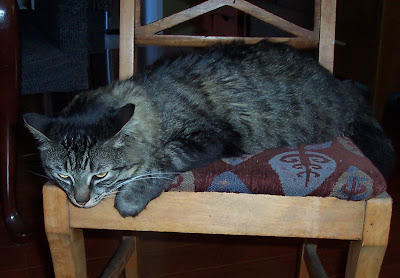 He already knows I'm going to make him move. Sigh.

Well. It will take me a while to get back in the blogging groove. But, give me some time. It's been a while, and I've got all of that arsenic to work out of my system.
Posted by gossamer at 2:44 PM 2 comments: