So, I was tooling around the internet today (yes, I know that I could have spent my time more effectively, but hey, I’m having a trying day, so get over it) and came across a hyper-efficient planning system. It can be used either electronically or with that new-fangled invention paper.

This system covers everything from daily appointments, to ranked to do lists, to long term goals and projects. It might even make hotel reservations for you and return emails.

It seems that everyone is getting organized these days. Even my dance teacher has a comprehensive list of activities that she hopes to accomplish each day. I don’t know if she has everything planned down to the minute, but it certainly sounds that way.

Well, I was thinking about all of this organization and planning, and general efficiency, and I came to a conclusion: this all sounds a lot like work; I am currently philosophically opposed to work of all kinds.

So, I have something else to add to my summer to do list:

#4 get disorganized.
Posted by gossamer at 5:00 PM No comments:

Usually television is not worth watching. I agree with Groucho Marx when he said, "I love television, everytime someone turns one on, I go into the other room and read a book."

But sometimes, just sometimes, there is something worth watching on TV. Today is one of those days. I walked into the livingroom to find my husband and son watching the "Yodelin' Kid from Pine Ridge," WITH THE SOUND OFF.

Now I ask you, what's wrong with this picture? Gene Autry is the Singing Cowboy, not the Silent Cowboy.

If Hillary wins, and I’m not saying she’s gonna, and I don’t know if I’ll vote for her myself (I’m still a bit bent over the whole Iraq thing), but if she wins, will that make Bill First Lady?

If Bill is First Lady, will he stay home and bake cookies?

If Barbara Bush had said that to me, I might have punched her. This is why I could never be in politics. I tend to say what I think, and react like a normal person instead of diplomatically, or with thoughts as to how these words/actions will play on the 5:00 news.

Of course, I also have a checkered past—so no politics for me. But hey, I can whine about it here with no repercussions, and whining is what I do best.

Aren’t you glad that I’m around to sort out the difficult problems?
Posted by gossamer at 9:08 AM No comments:

Tonight the wind came in
Caressed my shoulder
And invited me to come outside
Posted by gossamer at 11:26 PM No comments: 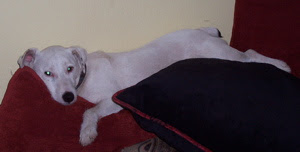 This is a picture of Buddy watching me workout this morning--proving once again that dogs are smarter than humans.
Posted by gossamer at 2:54 PM No comments:


I went to see the new Harry Potter film today, and I have a brief review:

The casting and performances were superb as always.

The production was impressive.

The adaptation of the novel was good, but it's never good enough. You just cannot capture the spirit of Rowling’s work in a two hour movie.

Luna Lovegood’s portrayal was different than I thought it would be, but quite nice.

Dolores Umbridge was suitably saccharine and evil—just what I like in a villain (or as one of my companions said, “A school administrator”—this is a timely comment that will be understood by anyone who teaches at my school).

I wanted to see more of Sirius’ house, and missed Mrs. Black.

I also missed the portable swamp created by the Wesley twins in the book.

I could have done with more of Bellatrix La Strange’s character and less of her cleavage—a bit too Elvira for my taste.

When Dumbledore (sniff, I still expect to see Richard Harris) and Voldemort fought it out, I thought to myself, “This is a real wizard’s duel.”

And finally, I am beginning to wonder if Voldemort and Michael Jackson go to the same plastic surgeon.
Posted by gossamer at 8:03 PM No comments:

“Who would wear that?”

“Nobody would ever wear that.”

Hey, it keeps me off the streets.
Posted by gossamer at 8:33 PM No comments:

Labels: it's a girl thing, what was I thinking, what were they thinking?

You know what the best thing about July 5th is?

Is it the memory of the many (and there were many) inspirational and patriotic speeches?

Is it the glow of fireworks that you can still see if you close your eyes (my town puts on a very good fireworks display)?

Is it the heat building towards 101 degrees (I sure hope the weather forecast is wrong)?

Is the the John Phillip Sousa tune I'm still humming this morning (and probably will be for the next week or so)?

It's leftover apple pie for breakfast!
Posted by gossamer at 10:33 AM No comments:

A Fate Worse Than Death

The worst thing that can happen to a girl happened to me last week--my signature scent was discontinued. I stood in front of Janet, at the perfume counter, and tears welled up in my eyes up as she sprayed a variety of new scents on little white sheets of paper.

I need to find a new scent. One that says who I am, in that special way only a signature scent can. I could just go to the lead scent in the house that created my signature scent; it’s a good scent, I’m just not sure it’s what I’m looking for. It’s not quite complex enough, and women always want to feel complex.

I could go back to an older scent that I used to wear. I lean toward the “Oriental” scents—there’s a big surprise—but most of them are a bit sexy for daytime wear. Also, not really acceptable for work.

I did have an intelligent conversation about perfume and perfumeries with Janet, and my husband was quite impressed. As I explained to him, I have been a girl for a long time.

He said that he thought it was working for me.
Posted by gossamer at 10:53 PM 2 comments:

Labels: it's a girl thing

He is covered with kitten scratches (as am I, but I didn't want a kitten).

My son is currently in charge of keeping the kitten out of trouble. My twelve year old son swears that the kitten can teleport, because he cannot keep up with him.