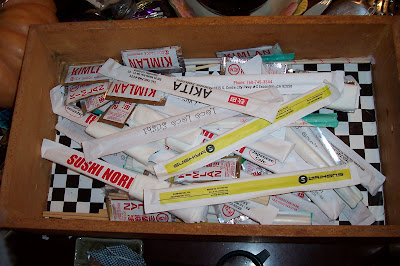 Do you think maybe I eat too much takeout sushi?
Posted by gossamer at 7:04 PM 3 comments:

I love fall, the crisp air, the people wearing coats and scarves, and rushing into stores to avoid the chill.

How cold is it?

Hey, this is Southern California, just last week everybody was wearing flip flops.
Posted by gossamer at 9:34 AM 2 comments:

I usually do my Thanksgiving Day shopping on Monday, or Tuesday at the latest, but this year that just didn’t work out. Shopping on Wednesday is just too traumatic for me. Not because I’m worried I won’t be ready—I’m always ready, but because all the type A personalities apparently wait until the last minute to do their shopping.

I was in and out of the store before 8:00 am, nonetheless, people had that crazed look in their eyes—even though they had a full 24 hours before anyone expected food of any kind.

I almost got run down by a frantic woman careening her cart around a corner—twice—same woman.

Two women demanded that I move my basket or myself so that they could reach something I was blocking. In both cases, I hadn’t even stopped walking, and so hardly constituted a roadblock, but to the chronically stressed out, I guess it was enough.

The best though was a woman who had loaded all of the brown and serve rolls into her cart (about two dozen) and then was thoroughly squeezing each package—presumably for freshness—and then returning the rejects to the shelves.

My trip to the store today makes tomorrow, with parents and in-laws, look downright relaxing.

Okay, I’m lying, but it sounded good.
Posted by gossamer at 8:42 AM No comments: