This morning I wore my black sweater
It's chilly in the morning
It's chilly in my classroom
This afternoon it got warm
I took my sweater off
No need for it anymore
This evening I went looking for my sweater
It had gotten chilly in the evening
It wasn't in the chair
It wasn't hanging over the newel post
I went to get a different sweater
Hanging in the closet was my black sweater
How clever of me
Posted by gossamer at 2:02 PM No comments: 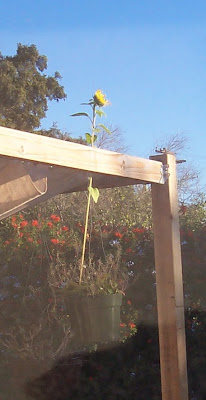 Determination.
Posted by gossamer at 10:24 AM No comments:

This blog is to thank all of the poll workers out there who spend their day working to get America's votes in, especially my friend Justy who has been an election judge in Wyoming for eight years. It is my dream job to be a poll worker here in California, but I always teach classes on Tuesday in the fall--maybe a June election sometime?

Anyway Justy, let me know if you figure out the postage and addressing scheme for those beyond the grave/afterlife absentee ballots, okay?

Go vote everybody!
Posted by gossamer at 8:00 AM No comments:

C-Span is running a telephone call in show asking people to call in and tell them why they are motivated to vote this year. People are calling in with various reasons, citing such things as health care reform, the wars in the Middle East, the economy, the divisiveness in government, etc. I’ve tried numerous times to get through because I’d like to share my reason, because no one has given my reason yet. In fact no one ever cites my reason.

I am turning out to vote because November 2 is the first Tuesday after the first Monday in November. I always vote. I ALWAYS VOTE. I will vote from the grave. Voting is not going to the mall. “Gee, it’s raining out. Maybe I’ll stay in and watch a video.” Voting is not going to the movies or going out for coffee with friends. Hell, it’s not even going to work. You can’t call in sick. "I'm tired." "I didn't get a flu shot and now I have the flu." "I don't have anything to wear."

Wear a surgical mask, and drag your sorry ass to the polls and VOTE.

Voting is not a privilege. I’m tired of people saying that. It’s not a right. It’s a responsibility. It’s a necessity. It’s like breathing. YOU MUST DO IT OR DIE.

See you at the polls. I’ll be the one handing out free beer—just kidding.
Posted by gossamer at 11:04 AM 2 comments:

Update on Rally to Restore Sanity/Fear:

For a more comprehensive list of the signs go to: Rally the Cause by Scott Henderson who obviously used technology to tape the event and create a comprehensive and alphabetized list of the signs, instead of having his son and and spouse shout out the content of the signs while he frantically typed them in, glancing up occasionally to catch glimpses of the festivities. He probably also didn't leave partway through to go get some locally raised organic eggs and pet the pygmy baby goat at the Farmer's Market either did he? Anyway, Scott I've emailed you to be sure that you don't mind me linking your exemplary list to my pathetic attempt.

I do have a socially responsible blog entry planned for later today that hopefully will make up for my woefully incomplete poster list.
Posted by gossamer at 8:25 AM No comments: