Because I know you are fascinated by the minutiae of my life,

Because I haven't written in awhile, and I don't want you to think I've dropped off the face of the earth,

Because a picture is worth a thousand words,

Here is a picture of my lunch: 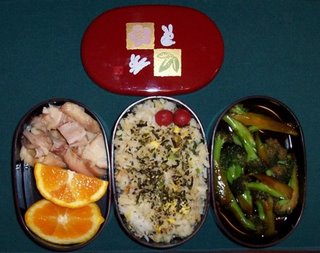 It is a bento style lunch with fried rice, chicken and broccoli. It is packed in a tiny Japanese lunchbox that stacks and has a carrying handle. Note the obligatory bunnies on the lid. All of the best bento boxes have bunnies. I have yet to figure out why.

The lunch by the way was delicious.

Dogs Will Eat Anything

Occasionally I give my dogs table scraps or other treats. One of my dogs, Tula, the Italian Greyhound, lives for treats, and she will eat all kinds of things: meat, veggies, potatoes, and she even tasted an apple core I once offered her. Now, I generally think of dogs as indiscriminant eaters, but Buddy, my Jack Russell Terrier, is actually quite finicky. I find this hard to believe in a dog that will troll the floor for any particle of edible matter, including the random dust bunny. Buddy also eats lizards; he prefers the head, feet, and tails, leaving the body for us to find. For goodness sakes, Buddy eats sticks.

But just try offering him eggs. Tula loves eggs, and prances around while I empty them into her dish. Buddy, stands by his dish as I spoon the eggs in, and then he looks up at me with a positively injured expression—as though I have just hit him. Then he checks his bowl again to be really sure that it is eggs after all. Then he looks over at Tula’s dish to make sure that she has also received eggs. Yes, she has.

He is a dog after all.
Posted by gossamer at 9:30 AM No comments:

Yesterday at my favorite Japanese café, I saw a guy leave by the back kitchen door. Nothing unusual about that, except that he was eating a burrito. Is this one of those “only in California” things?

The bad thing is, now when we go there, my son, who gets tired of eating Japanese food (imagine that), will want a burrito. Do you think we could get them to make us one?

I can hear the order now:

One order teriyaki chicken
One order California roll, 12 pieces
One order gyoza
And a bean and cheese burrito to go

I’m thinking--no.
Posted by gossamer at 7:08 PM No comments:

Labels: only in California?

I’ve been meaning to clean out the service porch for months now. It is a very small room that houses the washer and dryer, the water heater, the furnace, a utility sink, my vacuum cleaner, pet supplies, tools, cleaning supplies, and several bottles of purified water. Not bad for a 6.5 x 9 foot room. At any rate, as you may imagine, it gets cluttered and dusty, and needs periodic clean outs.

So, I’ve been meaning to do it.

Last night the water heater started leaking, and it didn’t stop. Out came the towels and buckets, and everything else in the room needed to move to the living room. A few hours of mopping, sorting, and rearranging bins, and the service porch is now clean.

What I want to know is this: did the cosmos lend a hand in inspiring me to get this job done that I was planning on doing anyway, or is this a case of “be careful what you ask for?”
Posted by gossamer at 7:51 AM No comments:

The Real Reason for Yoga

Yes, yoga is all about health, relaxation, and if you’re of a religious inclination, enlightenment. But yesterday, I learned what yoga was really for.

Yesterday at the beach, we had been walking barefoot in the sand (yes it was cold), and when I went to put on my shoes, I realized I had the usual beach dilemma: could I put my shoes on without getting sand in them? There were no benches anywhere in sight, and sitting in the sand would have simply compounded the problem. So, I did the only logical thing: I balanced on one foot, wiped the sand off my raised foot by brushing it on the other jeans’ leg, held my coffee and handbag in my left hand, and my hair in my right hand, and then inserted the now sandless foot into my waiting shoe. I repeated on the other side, and voila, no sand in the shoes.

That’s what yoga is really for.
Posted by gossamer at 7:27 AM 2 comments:

Where at the Mall Do They Sell That?

This weekend at the mall, I saw a man flossing his teeth. Really. Now, I’m all for dental hygiene, but don’t you think people should floss at home? I don’t want to watch him floss; I don’t want to think about the bits of tartar he is flicking in the process of flossing.

Where did he even get the floss anyway? Does he carry it with him in his wallet next to his library card and his spare condom?

Do they sell dental floss at the GAP or Orange Julius? Floss R Us?

Floss at home people. Some things are meant to be done without witness.
Posted by gossamer at 8:06 AM 3 comments:

Labels: what were they thinking?

My neighbor Jack, of “Jack and the Broomstick” (6/30/06), just brought me another bucket of figs. It’s the second this week. He so has my number.

A student, Wes, stopped by office hours today and delivered a bag of jujubes, not the candy, but a delicious fresh fruit. A few weeks ago, he brought Asian pears. I am such a lucky woman.


Happy Birthday to a person who wishes to remain anonymous. Don't worry--she knows who she is.
Posted by gossamer at 6:00 PM 2 comments:

Finally the cruelest month is finally over—September. Yes, I know that March is supposedly the cruelest month, but not around here. March is one of the best months where I live, but September is the worst month. It starts out hot and humid and it ends hot, dry, and windy.

I have no money in September, because even though I’ve been working since late August, I don’t get paid until September 30; it is one of the joys of working for the gov.

The only good thing about September, besides it finally being over, is my wedding anniversary, which we missed this year because my husband was out of town.

No, September is definitely the cruelest month.

Besides, it can’t be March; my birthday is in March.
Posted by gossamer at 2:45 PM 6 comments: